Since 1998 Dieter Urbach has been focusing on the topic of „utilization of wind energy through the development of new technologies“. Under “history” the several stages of development are listed chronologically sorted. 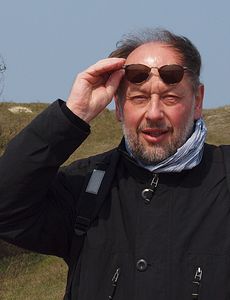 Already in the 1960ies Dieter Urbach made architectural illustrations to show and demonstrate planned large scale projects in Berlin. The collages resulted from using many different materials. Urbach used Photos particularly taken and cuttings from newspapers, ink and pencil drawings, airbrush and opaque white. Since there have not been computer yet which featured elaborate programs for animating and visualizing, all planning documents such as developing plans, layout designs, sections, views and so on they all were designed by hand, manually drawn.

The BERLIN GALERY, federal state museum for modern art, photography and architecture, shows charts of scratches of well-known architects from East Germany form the 1970ies. These show architectural ideas for building the East Berlin center into the capital of East Germany in unusual spatial and realistic presentation.

The following illustrations from Dieter Urbach are to be seen within the exhibition „RADICALLY MODERN“.